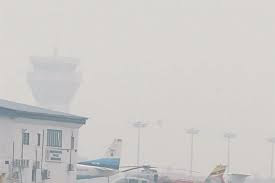 Is traditionally an atmospheric phenomenon in which dust, smoke and other dry particulates obscure the clarity of the sky. The World Meteorological Organization manual of codes includes a classification of horizontal obscuration into categories of fog,mist, haze, steam fog, smoke, dust, sand, snow and volcanic ash. Sources for haze particles include farming (ploughing in dry weather), traffic, industry and wildfires. Seen from afar (e.g. an approaching airplane) and depending on the direction of view with respect to the Sun, haze may appear brownish or bluish, while mist tends to be bluish grey. Whereas haze often is thought of as a phenomenon of dry air, mist formation is a phenomenon of humid air. However, haze particles may act as condensation nuclei for the subsequent formation of mist droplets; such forms of haze are known as "wet haze".

Haze often occurs when dust and smoke particles accumulate in relatively dry air. When weather conditions block the dispersal of smoke and other pollutants they concentrate and form a usually low-hanging shroud that impairs visibility and may become a respiratory health threat. Industrial pollution can result in dense haze, which is known as smog.

Haze can be defined as an aerial form of the Tyndall effect therefore unlike other atmospheric effects such as cloud and fog, haze is spectrally selective: shorter (blue) wavelengths are scattered more, and longer (red/infrared) wavelengths are scattered less. For this reason, many super-telephoto lenses often incorporate yellow filters or coatings to enhance image contrast. Infrared (IR) imaging may also be used to penetrate haze over long distances, wit a combination of IR-pass optical filters (such as the Wrattern 89B) and IR-sensitive detector.

Haze is no longer a domestic problem. It has become one of the causes of international disputes among neighboring countries. Haze migrates to adjacent countries and thereby pollutes other countries as well. One of the most recent problems concerned the two neighboring countries Malaysia and Indonesia.
WHY HAZE HITS MALAYSIA TODAY ?
NO AREA RECODS "GOOD" AIR QUALITY ?
PETALING JAYA :The air quality in Indera Mahkota, Pahang, has reached the "unhealthy"  level because of peat firs in Pekan, some 50 km away, as haze continues to hit the country,The Department of Environment said that as of 1pm today, the Air Pollutant Index (API) showed that none of the 64 areas which had their readings taken recorded "good" air quality.

According to the DOE's website, "unhealthy" air presents risks to those with heart and lung conditions.

The department said all areas in Peninsular Malaysia's west coast, Sabah and Sarawak were being affected by the haze coming from Sumatera and Kalimantan in Indonesia.

It said the pet fires at Kampung Pulau Manis in Pekan have yet to be fully extinguished.

"Peat fires which have reportedly broken out at Kuala Baram in Miri, Sarawak, have caused a spike in the API reading in Miri," it said.

It said the Asean Specialised Meteorological Centre has, based on satellite images, identified 42 hotspots in Sumatera, three in Kalimantan and four in Pahang.

The department said the National Open Burning Action Plan and National Haze Action Plan has been activated to coordinate the action taken by the relevant government agencies.

"State and local governments and land owners are advised to closely monitor areas which are easily and prone to catching fire such as garbage disposal sites, forests, peat land, fields, and agriculture and industrial land.

"The people are also reminded against open burning or allowing their land or premises to be encroached by irresponsible parties leading to open burning intentionally or otherwise," it said.

Under the Environmental Quality Act 1974, those caught carrying out open burning can be fined up to RM 500,000, jailed up to five years or both.

WHY HAZE IS DANGEROUS ?

What are the key air pollutants of concern?

The key air pollutants of concern include particulate matter (PM), sulphur dioxide, ozone, nitrogen dioxide and also CO (carbon monoxide). Short-term exposure (i.e. continuous exposure to unhealthy daily average PSI levels over a period of a few days) to these air pollutants can cause respiratory symptoms and aggravate existing heart or lung disease. Exposure to particulate matter and sulphur dioxide may also cause irritation of the eyes, nose and throat in healthy individuals.

In Singapore, the main air pollutant in the event of haze is particulate matter (PM). Singapore experiences haze from time to time, usually caused by forest fires in the region. It can be made worse by dry seasons, changes in wind direction, and when rainfall is low.

What is the short-term effect of the haze on my health?

There may be up to 1-3 days of time between exposure to haze and health effects/symptoms.

What are the long-term effects of the haze?
Studies have shown that persons living overseas with continuous exposure over several years to high ambient pollution from fine particles (i.e. particulate matter 2.5 (PM2.5); particles smaller than 2.5 micrometres), may have a higher risk of (i) carbiovascular effects, such as hearth attacks, (ii) reduced lung development, as well as (iii) the development of chronic respiratory diseases, such as asthma, in children.

What is the revised Pollutant Standard Index? How is it different from PSI reporting last year?

The new, integrated air quality reporting index incorporates PM2.5 in addition to sulphur dioxide (SO2), particulate matter (PM10), nitrogen dioxide (NO2), carbon monoxide (CO), and ozone. Previously, health advisories issued by the Government were based on both 24-hour PSI and 24-hour PM2.5, whichever was worse. Under the new air quality reporting system, the health advisory will be based on the new 24-hour PSI as it now directly takes into account PM2.5.

Which groups of people are more sensitive to haze?

In general, children, elderly, and people with chronic lung disease, heart disease are more sensitive to the health effects of haze, and should adopt the preventive measures in the MOH health advisory when air quality is poor. Individuals are advised to consult their doctor should they develop breathing difficulties. In addition, it is advised that pregnant women reduce exposure to haze for the health of their unborn baby.

HOW TO PROTECT YOURSELF FROM HAZE ?

The main pollutants in a haze that have the greatest health impact are those particles that are less than 2.5 micrometer.
Their effects depend very much on the severity of the haze and how long one has been exposed to them.

During a prolonged haze period when the air quality is poor, take the following precautions to protect yourself: