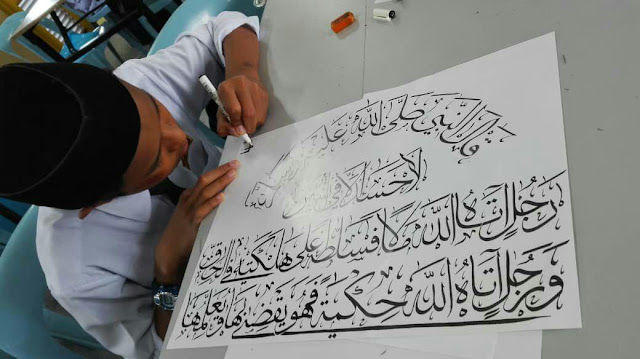 PETALING JAYA:
The National Congress on Jawi passed several resolutions after a two-hour meeting, chief of which was to put on hold the teaching of a Jawi calligraphy module in the Year Four Bahasa Melayu syllabus without a detailed discussion with all stakeholders.

The group's spokesperson Arun Dorasamy said more focus should be given on strengthening Bahasa Melayu as the national language while upholding vernacular schools and mother tongue education.

He said participants of the congress were of the opinion that Jawi calligraphy should be made an elective learning module for the pupils, away from the formal syllabus.

"We call on the Education Ministry to defer the implementation so that a roundtable discussion involving all stakeholders can be held.

"A list of resolutions passed today on the issue will be submitted to the ministry tomorrow (today), " he told a press conference after the meet.

A few hundred people, including representatives from vernacular schools board of governors, as well as Parent-Teacher Associations (PTAs), attended the meeting.

Arun said they had set up an appointment with the ministry's officials in Putrajaya at 11.30 am to submit the resolutions.

"We want to work with the government and find a win-win solution on this issue," he said.

Arun, who is also Sekat national secretary, said the congress was aimed at deraciliasing the teaching of Jawi in vernacular schools.

Initially, it was intended to complement the Chinese educationist group Dong Jiao Zong meeting on Saturday that was cancelled following a court order by the police, citing safety concerns.

The group also called for a dialogue with Education Minister Dr Maszlee Malik to discuss the issue.

JTSC coordinator Datuk Eddie Heng Hong Chai said the ministry should help pupils in vernacular schools master Bahasa Melayu by improving the teaching system because at least 20% of them failed the subject.

"We are not against learning Jawi calligraphy. It should no be compulsory but an option.

"Also, we want to protect the school boards' authority in deciding school policies, as it is unsuitable to leave the decision-making solely to the parents as many of them are not too interested or aware of the impact," he said.

Heng said the school boards should be given a say in deciding such matters.

"That is why we hope the ministry will listen to our concerns," said Heng, who heads the SJK (C) Sentul KL school board or governors.

He also noted the possibility of a legal challenge against the ministry as a last resort.

"This is not what we want. We hope for a dialogue session with the ministry so that a consensus can be reached, " he said.

According to the ministry, Jawi calligraphy was to be introduced in three pages of the Year Four Bahasa Melayu subject starting Jan 01.

This caused an uproar among various groups, prompting the ministry to first let teachers decide if they wanted to teach Jawi to pupils before passing the decision to parents in the latest guidelines.

Earlier in his speech, Prof Tajuddin said it was not right to label vernacular schools as "anti-national" because schools in Malaysia were originally set up by the community before independence.

"Leaders should understand that education is a right of the people whereby they only play the role of facilitators.

"When there are problems, they should meet the people and address the issues, " he said.

William said the government must not treat students like "white rats in the laboratory", and called for more discussions before implementing any new policy.