WHAT IS ECLIPSE SOLAR / RING ? 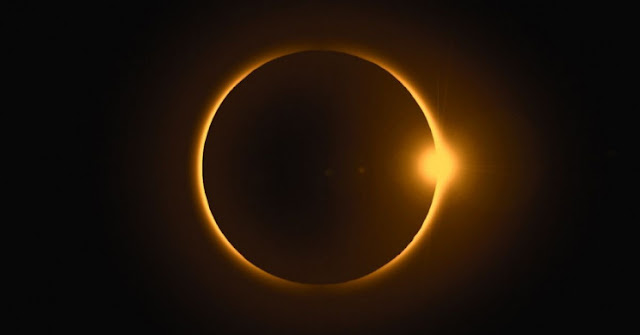 a). A total solar eclipse occurs when the Moon completely covers the Sun's disk, as seen in this 1999 solar eclipse. Solar prominences can be seen along the limb (in red) as well as extensive coronal filaments.

A Solar Eclipse (Ring) occurs when a portion of the Earth is engulfed in a shadow cast by the Moon which fully or partially blocks sunlight. This occurs when the Sun, Moon and Earth are aligned. Such alignment coincides with a new moon (syzygy) indicating the moon is closest to the ecliptic plane. In a total eclipse, the disk of the Sun is fully obscured by the Moon. In partial and annular eclipses, only part of the Sun is obscured.

If the Moon were in a perfectly circular orbit, a little closer to the Earth, and in the same orbital plane, there would be total solar eclipses every new moon. However, since the Moon's orbit is tilted at more than 5 degrees to the Earth's orbit around the Sun, its shadow usually misses Earth. A solar eclipse can only occur when the Moon is close enough to the ecliptic plane during a new moon. Special conditions must occur for the two events to coincide because the Moon's orbit crosses the ecliptic at its orbital nodes twice every draconic month (27.212220) days) while a new moon occurs one every synodic month (29.530587981) days. Solar (and lunar) eclipse seasons therefore happen only during eclipse seasons resulting in at least two, and up to five, solar eclipses each year; no more than two of which can be total eclipses.

Total eclipses are rare because the timing of the new moon within the eclipse season needs to be more exact for an alignment between the observer (On Earth) and the centers of the Sun and Moon. In addition, the elliptical orbit of the Moon often takes it far enough away from Earth that its apparent size is not large enough to block the Sun entirely. Total solar eclipses are rare at any particular location because totality exists only along a narrow path on the Earth's surface traced by the Moon's full shadow or umbra.

An eclipse is a natural phenomenon. However, in some ancient and modern cultures, solar eclipses were attributed to supernatural causes or regarded as bad omens. A total solar eclipse can be frightening to people who are unaware of its astronomical explanation, as the Sun seems to disappear during the day and the sky darkens in a matter of minutes.

Since looking directly at the Sun can lead to permanent eye damage or blindness, special eye protection or indirect viewing techniques are used when viewing a solar eclipse. It is technically safe to view only the total phase of a total solar eclipse with the unaided eye and without protection; however, this is a dangerous practice, as most people are not trained to recognize the phases of an eclipse, which can span over two hours while the total phase can only last a maximum of 7.5 minutes for any one location. People referred to as eclipse chasers or umbraphiles will travel to remote locations to observe or witness predicted central solar eclipses.

There are four types of solar eclipses (Ring):

A hybrid eclipse occurs when the magnitude of an eclipse changes during the event from less to greater than one, so the eclipse appears to be total at locations nearer the midpoint, and annular at other locations nearer the beginning and end, since the sides of the Earth are slightly further away from the Moon. These eclipses are extremely short in their duration at any point, at most just a few seconds at any location with just a few kilometres of the centerline of the path. Like a focal point, the width and duration of totality and annularity are near zero at the points where the changes between the two occur.

Central eclipse is often used as a generic term for a total, annular, or hybrid eclipse. This is, however, not completely correct: the definition of a central eclipse is an eclipse during which the central line of the umbra touches the Earth's surface. It is possible, though extremely rare, that part of the umbra intersects with the Earth (thus creating an annular or total eclipse), but not its central line. This is then called a non-central total or annular eclipse. The last (umbral yet) non-central solar eclipse was on April 29, 2014. This was an annular eclipse. The next non-central total solar eclipse will be on April 9, 2043.

The phases observed during a total eclipe are called:

The following factors determine the duration of a total solar eclipse (in order of decreasing importance):

Historical eclipses (Ring) are a very valuable resource for historians, in that they allow a few historical events to be dated precisely, from which other dates ancient calendars may be deduced. A solar eclipse of June 17, 763 BC mentioned in an Assyrian text is important for the chronology of the ancient Near East. There have been other claims to date earlier eclipses. The Book of Joshua 10:13 describes an event that a group of University of Cambridge scholars concluded to be the annular solar eclipse that occurred on 30 October 1207 BC. The Chinese king Zhong Kang supposedly beheaded two astronomers, Hsi and Ho, who failed to predict an eclipse 4,000 years ago. Perhaps the earliest still-unproven claim is that of archaeologist Bruce Masse, who putatively links an eclipse that occurred on May 10, 2807 BC with a possible meteor impact in the Indian Ocean on the basis of several ancient flood myths that mention a total solar eclipse.

More common, but still infrequent, is a conjunction of a planet (especially, but not only, Mercury or Venus) at the time of a total solar eclipse, in which event the planet will be visible very near the eclipsed Sun, when without the eclipse it would have been lost in the Sun's glare. At one time, some scientists hypothesized that there may be a planet (often given the name Vulcan) even closer to the Sun than Mercury; the only way to confirm its existence would have been to observe it in transit or during a total solar eclipse. No such planet was ever found, and general relatively has since explained the observations that led astronomers to suggest that Vulcan might exist.

During a total solar eclipse, the Moon's shadow covers only a small faction of the Earth. The Earth continues to receive at least 92 percent of the amount of sunlight it receives without an eclipse - more if the penumbra of the Moon's shadow partly misses the Earth. Seen from the Moon, the Earth during a total solar eclipse is mostly brilliantly illuminated, with only a small dark patch showing the Moon's shadow. The brilliantly-lit Earth reflects a lot of light to the Moon. If the corona of the eclipsed Sun were not present, the Moon, illuminated by earth light, would be easily visible from Earth. This would be essentially the same as the earthshine which can frequently be seen when the Moon's phase is a narrow crescent. In reality, the corona, though much less brilliant than the Sun's photosphere, is much brighter than the Moon illuminated by earthlight. Therefore, by contrast, the Moon during a total solar eclipse appears to be black, with the corona surrounding it.

The Solar Eclipse of March 20, 2015, was the first occurrence of an eclipse estimated to potentially have a significant impact on the power system, with the electricity sector taking measures to mitigate any impact. The continental Europe and Great Britain synchronous areas were estimated to have about 90 gigawatts of solar power and it was estimated that production would temporarily decrease by up to 34 GW compared to a clear sky day. The temperature may decrease by 3 Celcius, and wind power potentially decreases as winds are reduced by 0.7 m/s.

In addition to the drop in light level and air temperature, animals change their behavior during totality. For example, birds and squirrels return to their nests and crickets chirp.

Eclipses only occur in the eclipse season, when the Sun is close to either the ascending or descending node of the Moon. Each eclipse is separated by one, five or six lunations (synodic months), and the midpoint of each season is separated by 173.3 days, which is the mean time for the Sun to travel from one node to the next. The period is a little less than half a calendar year because the lunar nodes slowly regress. Because 223 synodic months is roughly equal to 239 anomalistic months and 242 draconic months, eclipses with similar geometry recur 223 synodic months (about 6,585.3 days) part. This period (18 years 11.3 days) is a saros. Because 223 synodic months is not identical to 239 anomalistic months or 242 draconic months, saros cycles do not endlessly repeat. Each cycle begins with the Moon's shadow crossing the Earth near the north or south pole, and subsequent events progress toward the other pole until the Moon's shadow misses the Earth and the series ends. Saros cycles are numbered; currently, cycles 117 to 156 are active. The last solar eclipse occured on July 2, 2019. It was a total solar eclipse visible from South America.