WHO IS LIBYA'S HOUSE SPEAKER ACTUALLY ? 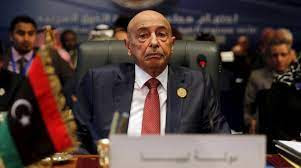 Libya's influential speaker of parliament announced he will run for president, making him the latest candidate to join the race for the country's highest office after years of civil war.

Aguila Saleh, 77, who has led Libya's House of Representatives since 2014, announced his candidacy in a video statement on November 17, 2021 (Wednesday).

The elections are supposed to be held on December 24, 2021 before Christmas Eve, but face growing uncertainty after two (2) controversial candidates declared they are running.

In the past of week, a son of the country's longtime ruler Muammar Gaddafi and powerful renegade military commander Khalifa Haftar also submitted their bids to run.

A native of the eastern city of Al-Qubah, Saleh has been a fixture on Libya's political scene in recent years.

The body he heads came to power through elections in 2014 that ended up being contested. In the aftermath, the country split further into territories with rival authorities, and the law-making body fled from the capital of Tripoli to the eastern city of Tobruk after a court ruled it was no longer legitimate.

" We are working to overcome the past and close the chapter of conflict, and to embark on the future, " Salleh, a former judge, said in the statement.

Libya has been racked by chaos since a 2011 NATO-backed uprising toppled Muammar Gaddafi, who was later killed.

The oil-rich nation has for years been split between a government in the east, backed by Haftar, and a UN-brokered administration in Tripoli, aided by Western-based Libyan militias. Each side has also had the support of mercenaries and foreign forces from Turkey, Russia and Syria and other regional powers.

Since February, 2021, a unity government appointed during UN-led talks has been meant to lead the country to the December elections.

In recent years, Saleh has drawn the ire of many people after lending support to Haftar's failed assault on Tripoli.

Analysts saw Haftar's defeat at the hands of Libya's Government of National Unity in mid-2020 as an opportunity for Saleh to play a more prominent role and help mediate between east and western Libya.

Disputes persist over the election rules, including who should be eligible, the schedule, and the vote's legal basis, less than six (6) weeks before it is due to take place, raising doubts over whether it will happen.

The only law issued for holding the election is one Saleh issued in September, which critics said was done without a full vote or proper quorum.

The critics said key provisions seem designed to let Saleh and his eastern ally Haftar run without risk of losing their positions if they failed to win.

Defenders of the law say it was properly passed through parliament and accuse its critics of trying to delay or derail Libya's first election since 2014.

That vote, which created the House of Representatives to oversee the transition to an as-yet unwritten constitution, was quickly overshadowed by Libya's division between eastern and western factions.

Saleh was sanctioned by the United States and European Union after he refused to recognise the UN-backed Government of National Accord.

The sanctions were lifted early this year as the peace process developed, including the establishment of a new unity government and the road to elections.

Other obstacles to the vote include occasional infighting among armed groups, the deep rift that remains between Libya's east and west, and the presence of thousands of foreign fighters and troops.

Saleh handed over his duties three (3) months before election day to become eligible to run.