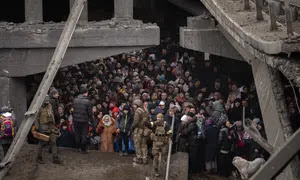 UKRAINE " Will Win This War " says foreign minister Dmytro Kuleba at meeting with Antony Blinken at the Polish Border; Putin warns western countries against implementing a no-fly zone over Ukraine.
Agonizing scenes have unfolded once again at a hospital in the Ukrainian port city of Mariupol, as medics fought in vain to save an 18-month-old boy, a young victim of Russian attacks on the city, and not the first child victim in this city.

Authorities in the city have said an evacuation of civilians has been postponed because Russian forces encircling the place were not respecting an agreed ceasefire.

In a statement, the city council asked residents to return to shelters in the city and await further information on evacuation.

As the AP reports, yesterday a young man dashed into a hospital in Mariupol with a desperately wounded toddler in his arms, the child’s mother on his heels. Doctors are forced to use smartphone torches to examine patients’ wounds. They raced to save the boy, named Kirill, but were not able to.

The boy’s mother, Marina Yatsko and her boyfriend Fedor wept in each other’s arms.

Distraught staff sank to the floor and tried to recover themselves somewhat before the next emergency arrived.

Antony Blinken, US secretary of state, was in the city of Rzeszow in Poland earlier today, just prior to meeting the Ukrainian foreign minister at the border between Ukraine and Poland.

The Nato alliance pledged to step up support for eastern flank members such as Poland to counter the Russian invasion of Ukraine last month.

Poland is seeking more US forces on its territory, where there are currently more than 10,000 American troops.

Rau said Poland had already taken in more than 700,000 refugees from Ukraine and that he expected hundreds of thousands more in the coming weeks unless Russia backs down.

“Poland will never recognise territorial changes brought about by unprovoked, unlawful aggression,” he said, adding that his country will demand that alleged Russian war crimes committed in Ukraine will be prosecuted.

Morawiecki and Blinken discussed stepping up sanctions and freezes of assets on Russia, which Morawiecki said should be “crushing” for Russia’s economy.

No Russian banks should be exempted from the exclusions from the SWIFT (international bank communications) system, he said. Currently, all but the largest Russian banks have been kicked off the financial messaging service.

Bennett is coordinating his efforts in the crisis with the United States, France and Germany, an Israeli official said.

After his meeting with Putin, Bennett headed to Berlin for talks with German chancellor Olaf Scholz, his spokesperson said and Reuters reported.

French president Emmanuel Macron had spoken to Bennett before he flew to Moscow to brief him on his own conversations with Putin, the Elysée Palace said.

Israel, at the behest of Zelenskiy, has offered to mediate in the conflict between Russia and Ukraine, though officials have previously played down expectations of any breakthrough.

In their three-hour meeting in the Kremlin, the Israeli official said, Bennett also raised with Putin the issue of the large Jewish community caught up in the war in Ukraine.

Israel will send medical teams to Ukraine next week to set up a field hospital that will provide treatment for refugees, its Health Ministry said.

While Israel, a close ally of the United States, has condemned the Russian invasion, voiced solidarity with Kyiv and sent humanitarian aid to Ukraine, it has said it will maintain contact with Moscow in the hope of helping to ease the crisis.

Israel, home to a substantial population of immigrants from the former Soviet Union, is also mindful of Moscow’s military support for president Bashar al-Assad in next-door Syria, where Israel regularly attacks Iranian and Hezbollah military targets.

Communication with Moscow prevents Russian and Israeli forces from accidentally trading fire. Bennett and Putin also discussed the ongoing talks between world powers, including Russia and Iran, about reviving a 2015 nuclear deal.

Russia said on Saturday that western sanctions imposed on it over its invasion of Ukraine had become a stumbling block for the Iran nuclear deal. Israel opposes any revival of the deal.

Bennett, a religious Jew, flew to Moscow in violation of Sabbath law because Judaism permits this when the aim is to preserve human life, his spokesperson said.

He was accompanied by his Ukrainian-born housing minister, Zeev Elkin. Elkin had in the past accompanied former prime minister Benjamin Netanyahu as an interpreter in his talks with Putin.

Volodymyr Zelenskiy, the president of Ukraine, urged US lawmakers to help provide aircraft to defend the country against the Russian invasion, during a video meeting with members of Congress earlier today.

Chuck Schumer, the Democratic senator from New York and US Senate majority leader, said Zelenskiy “made a desperate plea” for the military aid, which would include planes, drones and anti-aircraft missiles. The Ukrainian president praised sanctions placed upon Russia during the meeting but pressed US lawmakers to go further by banning oil imports from Moscow.

“These planes are very much needed,” Schumer said in a statement following the gathering of more than 280 senators and House of Representative members. “And I will do all I can to help the administration to facilitate their transfer.”

On Friday, Zelenskiy criticised Nato for not imposing a no-fly zone above Ukraine. “All the people who die from this day forward will also die because of you,” he warned in a speech.

Nato has said sending jets to shoot down Russian planes would risk a severe escalation in the conflict. Zelenskiy made a ‘desperate plea’ for military aid to more than 280 senators and representatives as Congress works on a $10bn package.

On Friday, Zelenskiy criticized Nato for not imposing a no-fly zone above Ukraine. “All the people who die from this day forward will also die because of you,” he warned in a speech. Nato has said sending jets to shoot down Russian planes would risk a severe escalation in the conflict.

Russian-made fighter jets familiar to Ukrainian pilots may be sent to the beleaguered country, however, possibly via US allies in Europe. Congress is working on a bipartisan $10bn package of humanitarian and security aid that could facilitate this.

Republican senators, including Marco Rubio and Lindsey Graham, tweeted their support for Zelenskiy and further measures against Russia following the meeting. Rick Scott, another Republican, said the US should target Russia and Belarus by taking “every action to destroy their economies”.

In Ukraine, Russian forces are attempting to shell and encircle the cities of Kharkiv, Mykolaiv, Chernihiv and Sumy, with numerous reports of civilian areas being hit. Odesa, Ukraine’s largest port city, is under repeated attack from Russian ships, according to Ukrainian officials.

Vladimir Putin, Russia’s president, has refused to call off the invasion in face of sanctions that are withering the Russian economy, instead moving to shut down Facebook and Twitter access in the country in an attempt to quell internal dissent.

Putin also warned against any Nato-imposed no-fly zone. “That very second, we will view them as participants of the military conflict, and it would not matter what members they are,” he said.

The United Nations has warned of a growing humanitarian crisis within Ukraine, with the UN’s World Food Programme saying that millions of people require food aid “immediately”. An estimated 1.4 million people have fled Ukraine to neighbouring countries.

Talks between Tehran and global powers to revive the tattered 2015 nuclear deal - to avoid Iran becoming a nuclear military power - have run into difficulty with a new demand from Russia for written American guarantees that sanctions on Moscow over the invasion of Ukraine would not harm Russian cooperation with Iran.

There had been progress at talks in the Austrian capital of Vienna but Russia’s demand is “not constructive”, a senior Iranian official said today.

The announcement by Russia, which could torpedo months of indirect talks between Tehran and Washington in Vienna, came shortly after Tehran said it had agreed a roadmap with the United Nations nuclear watchdog to resolve outstanding issues that could help secure the nuclear pact.

“Russians had put this demand on the table (at the Vienna talks) since two days ago. There is an understanding that by changing its position in Vienna talks Russia wants to secure its interests in other places. This move is not constructive for Vienna nuclear talks,” said the Iranian official in Tehran, speaking to Reuters.

Russian foreign minister Sergei Lavrov said on Saturday that the Western sanctions imposed over the war in Ukraine had become a stumbling block for the Iran nuclear deal, warning Russian national interests would have to be taken into account.

Lavrov said Russia wanted a written guarantee from the United States that Russia’s trade, investment and military-technical cooperation with Iran would not be hindered in any way by the sanctions.

When asked whether Russia’s demand would harm 11 months of talks between Tehran and world powers, including Russia, Iran Project Director at the International Crisis Group, Ali Vaez, said: “Not yet. But it’s impossible to segregate the two crises for much longer.”

Two diplomats, one of them not directly involved in the talks, said China also has demanded written guarantees that its companies doing business in Iran wouldn’t be affected by US sanctions.

Such demands may complicate efforts to seal a nuclear deal at a time when an agreement looked likely. All parties involved in the Vienna talks had said on Friday they were close to reaching an agreement.

The 2015 agreement between Tehran and major powers eased sanctions on Tehran in return for limiting Iran’s enrichment of uranium, making it harder for Tehran to develop material for nuclear weapons. The accord fell apart after President Donald Trump withdrew the United States in 2018.

He said Moscow needed to defend Russian speakers in Ukraine’s east as well as its own interests.

In televised comments to female flight attendants he said Russia wanted Ukraine to be “demilitarised”, “denazified” and to have neutral status.

Here’s I am sharing updated summary from Reuters:

Russian President Vladimir Putin said Western sanctions were akin to war as his forces pressed their assault on Ukraine on Saturday for a 10th day and the IMF warned that the conflict would have a “severe impact” on the global economy.

Moscow and Kyiv traded blame over the failure of plans to impose a brief ceasefire and enable civilians to evacuate two cities besieged by Russian forces. Russia’s invasion has already driven nearly 1.5 million refugees westwards into the European Union.

Ukraine’s President Volodymyr Zelenskiy made a “desperate plea” for eastern Europe to provide Russian-made aircraft to his country during a call with U.S. senators on Saturday, said the chamber’s majority leader, Chuck Schumer.

NATO, which Ukraine wants to join, has resisted Zelenskiy’s appeals to impose a no-fly zone over his country, saying this would escalate the conflict outside Ukraine. But there is strong bipartisan support in the U.S. Congress for providing $10 billion in emergency military and humanitarian aid to Ukraine.