The Greatest Men's Tennis Player of All Time

Who Is The Greatest Men's Tennis Player Of All Time ? 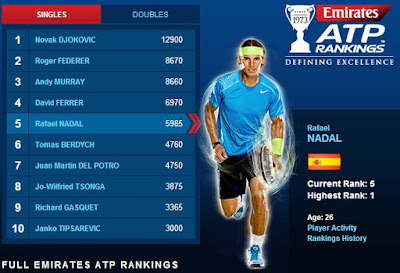 I'm well aware that it's hard to compare eras, the equipment is different, top players travel with physios, nutrition is different, Rod laver won a Grand Slam, Pete Sampras won 14 majors, players didn't really start playing in Australia until the mid or late 80's and there aren't as many great players as there used to be.

All those argument have some merit but to me, it's a no-brainer, the three greatest tennis players that ever lived are playing right now, at the top level and I don't even think it's debatale. SO, who is the greatest men's tennis player of all time?

First let's look at the numbers:

When you examine these hard numbers you have to look a little closer at them and put some context to them. Roger Federed is 4.5 and 5.5 years older than Nadal and Djokovic respectively. He won his first AT{ title in 2001, whereas Nadal won his first in 2004 and Djokovic 2006. Federer had his most dominant period from 2004 - 2007 where he won an absurd 11 grand slam titles. Roger's greatest strength is and has been his incredible consistency throughout his career.

While Nadal has always been incredibly consistent winning the French Open an incomprehensible 12 times dating back to 2005; his most dominant period was 2008 2010 where he won 6 majors and completed the career grand slam.

Novak Djokovic had his extended period of dominance from 2001 - 2016 where he won 11 majors and was in 7 other finals. He not only completed the career grand slam to match Federer and Nadal but he also held all four grand slam titles at the same time. Something nobody had done since Rod Laver won the grand grand slam in 1969. I remember because I was in Paris to witness his 2016 Roland Garros win over Andy Murray!

The reason I mention the period of dominance and age is because during each players dominant years they accumulated a lot of titles and statistics while keeping the others down. Hence, the descending age to tile chart with these 3 players. However, what really sets them apart to me is the head to head match ups and those numbers might surprise you.

Djokovic leads 26 - 22 overall, 14 - 6 in all Finals, 5 - 3 in Masters Finals and 4 - 1 in Grand Slam Finals with Federer's only win coming in the 2007 US Open Final which was Djokovic's first ever Grand Slam Final. Plus Djokovic has beaten Federer three times in the Wimbledon final without losing one to him. This is a very significant thing because Federer is widely considered the greatest grass court player ever. That said, he has only beaten Djokovic once at Wimbledon in a 2012 semifinal - never when it's meant the most.

I've seen nearly every one of these matches between these 2 greats. Federer won the majority early in the rivalry and Djokovic has pretty much dominated in the last several taking  the head to head lead and more importantly - winning handily the biggest matches, the finals.

While most of their matches over the years have been very competitive, none have  been better than the 2019 Wimbledon final. In my opinion, it's the greatest match I've ever seen and in the end, Djokovic prevailed as he has so often in the biggest matches versus Federer.


Djokovic leads 28 - 26 overall, 15 - 11 in all Finals, and they're tied 3 - 3 in Masters Finals and 4 - 4 in Grand Slam Finals. It needs to be noted that Djokovic has beaten Nadal in all 4 Grand Slams including Roland  Garros where Nadal has won 12 titles and only lost 2 matches since 2005. Federer never beat Nadal at the French Open in 6 opportunities including 4 finals along with two semifinals.

These are perhaps the most entertaining matches in the history of tennis. I've been fortunate to witness several in person and yearn for more. The most interesting thing in this rivalry is that Nadal leads on clay 17 - 7. 7 losses to Djokovic is more on clay than Federer, Murray, Wawrinka and basically everyone  else combined.

These two guys play a similar style of baseline counter-punching. This has produced some of the greatest matches in tennis history. Their 2012, nearly 6 hour Australian Open Final to me is one of the top 2 - 3 greatest matches ever played - surely the most physical match I've ever seen. Every match is a  battle and a pleasure to watch.

This is a tough one for any Federer fan to swallow because Nadal basically has owned Federer over the  years. Yes Roger has won 6 of the last 7 meetings to narrow the gap a bit but his inability to beat Rafa on clay and never beat him in Paris, never even taking him to 5 sets at Roland Garros, definitely hurts his case.

These two have played some great matches over the years including 5 set finals in the 2007 and 2008 Wimbledon finals. The 2008 match is widely considered the greatest match ever although  I think the 2019 final eclipsed it. Their 2009 and 2017 Australian Open Finals were also great and they've had some great Masters matches as well. Their 2006 Rome Final, although not a major, was beyond words epic, although in the end, as usual, Nadal won on clay.

So, who is the greatest men's tennis player of all time? After really examining  the numbers and the fact that I've meticuloursly watched these 3 warriors for the last 15 years and more: I can make an argument for and against each of them for being the greatest of all time but in my mind here are the bottom line arguments.

Roger Federer, at the moment has the most grand slam titles and has been unbelievably consistent for nearly 20 years. But his inability to beat Rafael Nadal consistently and basically at on clay hurts his case massively. How can you be the best of all - time if you cannot beat your biggest rival at Roland Garros in 6 tries especially when Nadal beat Federer at Wimbledon and took him to 5 another time. He's also 1 - 4 versus Djokovic in major Finals.

Rafael Nadal is unquestionably the greatest caly court player of all time. In fact, his dominance on clay may be the most dominant thing in any sport - ever. Of his 83 titles, 60 are on clay. Of  his 18 majors, 12 are French Opens. Nothing against his amazing clay court prowess but it overshadows the rest of his game; which is also great. But he is not the best all court player of the 3 men and he has a losing record to Djokovic as well.

Novak Djokovic took his lumps from Federer and Nadal early on his career, learned, waited patiently and then took over. His peak was and is better and more dominant than any palyer - ever. More importantly, he wins finals against his biggest rivals. He is 29 - 18 in all finals against Federer and Nadal. That's a big number. Plus, he has a winning record against them both and has beaten Federer at Wimbledon three times in the final and has beaten Rafa at Roland Garros. Additionally, he is the only  person ever to win all 9 Masters 1000 events - that cannot be understated. Add that he's the youngest of the group and I don't think he's done yet. barring injury he'll add more titles to continue his assault on the other 2 guys.

As a Federer loyalist that hurts to say, but sometimes the truth hurts. In the end, many of the victory numbers will more or less even out. However for me, Novak Djokovic consistently beats his biggest rivals in the biggest  matches on all surfaces. That's the bottom line as to why Djokovic ist the greatest  men's tennis player of all time. What do you think ?

Articles You Must Look