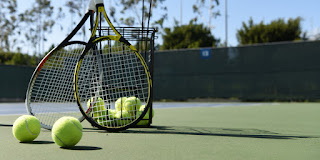 B # Is Tennis a hard sport to learn ?
Tennis is, first and foremost, a sport of timing and precision. Because of this component, the time commitment required to become a competent player is greater than with many other sports. There are a lot of great athletes out there who are able to rely almost exclusively on their athleticism to learn and excel at sports like football and basketball. They are able to take time off between seasons and in many instances pick right back up from where they left off. Tennis is a bit different because while it helps to be a naturally gifted athlete, it's not essential. There is a lot of repetition and strategy involved (much like with golf) and if you hit enough balls the right way over several years, work on your fitness level, and play enough competitive matches, one can become very good. It's almost a necessity to play year-round. It's extremely challenging to take a substantial amount of time off from tennis and then pick right back up from where your left off. Timing is a huge part of the sport and you'll find yourself VERY rusty if you question ultimately depends on what you're looking to do with tennis. It's not difficult to learn the basics to become a high-level competitive player because of the years of matches and training required with very little time off. It could help if you're already a gifted athlete, but I've seen very poor athletes become amazing tennis players with the right  dedication and training on a year-round basis.

Here I am sharing with help you begin to learn to play Tennis !

To begin to learn to play Tennis, you need to understand its unusual scoring method (as mentioned articles before).

D # The Tennis Court
After covered scoring (mentioned before in article), the first step to learn as a Tennis Beginner - let's move on to understanding the court. A Tennis court is 78 ft long by 27 ft wide, and divided in half length-wise by the net. At each end of the court, there are white baselines - here, the serves are taken. These are also the out-of-bounds lines- a ball must not bounce beyond them or it's out and the player who hit the ball loses a point.

E # What mean Singles Tennis ?
Now that you understand the court, let's learn to play Tennis with some specifics. As already mentioned, a Tennis beginner can play a singles or doubles game with either one or two players on each side of the net. The game - and, each point - begins with a serve taken from behind the baseline. The ball must bounce into the diagonally opposite service court. (Your serve may be your most difficult stroke as you learn to play tennis). The play - or point - continues until one player fails to hit the ball back or hits it out - of - bounds.

F # What is Tennis Serve?
Now we move to what tennis serve. Learning to serve is essential as you learn to play tennis. Here's how (for right - handed players - left-handed players should reverse the directions): Stand with both feet behind the baseline. Assume a sideways stance with your left foot pointed towards the right hand net post. Hold the ball in your left hand. Raise your left hand throwing the ball upwards about one foot in front of your left foot and about eighteen inches above your reach. While the ball in the air, move your racket back and up. Hit the ball at full stretch, with your racket arm straight, at the highest point possible. You are switching the weight of your body from your back foot to your front foot to give added strength to your shot.

Hit the ball with an "up and over" action as if you were throwing the racket at it - and, after hitting the ball, follow through with your swing. This follow through will propel you forward into the court, prepared to hit the returned shot. Good! You're progressing well in your efforts to learn to play tennis! If you're unhappy with your serve - perhaps even miss the ball when you swing - don't worry; this is common when you first learn to play tennis.

G # What mean Tennis Doubles Game ?
But would if it's a doubles game? How do I learn to play tennis then, you wonder?! Who Serves ? With doubles, the serving position rotates across teams and partners. For instance, if team partners A and B were playing doubles with team partners C and D, partner A would serve first and then it would rotate to partner C and then back to partner B and finally to partner D.

Also important to know when you learn to play tennis: At the end of the odd-numbered games in a set, including the first game, the players exchange ends of the court. This is true in both singles and doubles games.

1). How To Play Tennis with a forehand stroke ?
Begin with the grip. The most common grip in tennis is the eastern forehand; the eastern forehand grip is also the best choice as you learn to play tennis. Use it for your forehand drive and the majority of your shots. Place your hand flat on the racket strings, and then slide your hand down to the handle. Wrap your fingers around the racket. Your first finger should be forward slightly as if you were holding the trigger of a gun. Keep all tensions out of your fingers. The eastern forehand grip is often called the "shake hands" grip by those who have just  begun to learn to play tennis, because, in essence, you are shaking hands with the racket. For most people, it is the preferred grip for serving - particularly, when you first learn to play tennis.

2). How To Play Tennis with a backhand stroke ?
Next, again begin with the grip. Whether you choose to use a one handed backhand or a two handed backhand, it's important to grip the racket closer to the top bevel with your dominant hand. For a two handed backhand, the non-dominant hand should grip the racket underneath the handle, and keeping your palm rested firmly on the racket handle. Fingers should be free of tension, and not too close together. The grip for the two hander should have your other hand adjacent to the first. It's necessary to practice both the forehand and backhand tennis strokes as you learn to play tennis.

I # Choose the Right Equipment When To Start play Tennis ?
Finally, choosing the right equipment is essential as you learn to play tennis. Proper grip size avoids pain. To measure the correct grip size, hold your racket hand out palm side up, and measure from the crease of the ring finger to the tip of the ring finger. This should be the measurement around your racket handle, generally about four inches in diameter.

Even your choice of shoes, socks, and other clothing are important considerations when you learn to play tennis. As opposed to running shoes, tennis shoes are made to withstand side - to - side movement. They should have a herringbone tread for longer lasting protection and grip. Socks should be thick and able to absorb sweat, there by preventing infections such as athlete's foot. Generally, tennis clothing is white, a color chosen to best reflect the sun and keep the player cooler. (Wear the appropriate gear even when just beginning to learn to play tennis!).

K # Please Improve Your Tennis Technique
If you want to play like the PROS, then you need to have the game.