What Is Tennis Sport ? 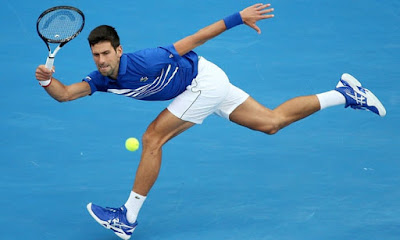 Tennis is a racket sport that can be played individually against a single opponent (singles) or between two teams of two players each (doubles). Each player uses a tennis racket that is strung with cord to strike a hollow rubber ball covered with felt over or around a net and into the opponent's court. The object of the game is to maneuver the ball in such a way that the opponent is not able to play a valid return. The player who is unable to return the ball will not gain a point, while the opposite player will.

Tennis is an Olympic sport and is played at all levels of society and at all ages. The sport can be played by anyone who can hold a racket, including wheelchair users. The modern game of tennis originated Birmingham, England, in the late 19th century as lawn tennis. It had close connections both to various field (lawn) games such as croquet and bowls as well as to the older racket sport today called real tennis. During most of the 19th century, in fact, the term tennis referred to real tennis, not lawn tennis.

The rules of modern tennis have changed little since the 1890s. Two exceptions are that from 1908 to 1961 the server had to keep one foot on the ground at all times, and the adoption of the tiebreak in the 1970s. A recent addition to professional tennis has been the adoption of electronic review technology coupled with a point-challenge system, which allows a player to contest the line call of a point, a system known as Hawk-Eye.

i - Object Of The Game

A tennis match can be played by either one player on each side - a singles match - or two players on each side - a doubles match (as mentioned above). The rectangular shaped court has a base line (at the back), service areas (two spaces just over the net in which a successful serve must land in) and two tram lines down either side. A singles match will mean you use the inner side tram line and a doubles match will mean you use the outer tram line.

A court can be played on four main surfaces including grass, clay, hard surface and carpet. Each tournament will choose one surface type and stick without throughout. All that is required in terms of equipment is a stringed racket each and a tennis ball.

You need to score four points to win a game of tennis. The points are known as 15 (1 point), 30 (two points), 40 (three points) and the fourth would result in the winning point and the end of the game. If the scores went to 40-40 this would be known as deuce. When a game reaches deuce the player must then win by two clear points.

To win the game you must win a certain amount of sets (best of three for women's matches and best of 5 sets for men's matches). Winning a set is simply the first player to reach 6 games but have to be clear by at least 2 games. If your opponent wins 5 games you must win the set 7-5. If the set goes to 6-6 then a tie break is played and it's simply the first player to 7 points.

What Is Tennis Rules ?