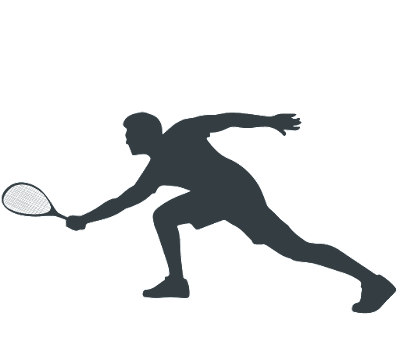 Squash is a ball sport played by two (singles) or four players (doubles squash) in a four-walled court with a small, hollow rubber ball. The players must alternate in striking the ball with their racquet and hit the ball onto the playable surfaces of the four walls of the court.

The game was formerly called squash rackets, a reference to the "squashable" soft ball used in the game (compared with the harder ball used in its sister game rackets).
The governing body of Squash, the World Squash Federation (WSF) is recognised by the International Olympic Committee (IOC), but the sport is not part of the Olympic Games, despite a number of applications. Supporters continue to lobby for its incorporation in a future Olympic Program.

Why is Squash (Sport) Popular Now?

Squash is considered the World's best sport now. If you've never tried squash (the sport, not the vegetable), you're in for a wake-up call. Watch squash champion Dato Nicol explain why it's so tough.

Raise your hand if you though squash was just a vegetable that you ate during Thanksgiving. Yeah, same. But squash is actually one of the toughest sport out there. To be a successful squash player, you need to be in crazy good shape and dedicated to enhancing all of your fitness skills-both on and off the court.

Don't believe it? Back in 2003, Forbes ranked squash as the number-one healthiest sport after taking calorie burn, cardio endurance, muscular strength, muscular endurance, flexibility, and injury risk into consideration. the Professional Squash Association (PSA) also dubs it one of the toughest racquet sports. And if you're still not convinced, just watch Dato Nicol, the highest ranked Malaysian squash ever (female or male) get after it.


Still unfamiliar with the sport?
Here's what you need to know:
Squash is relatively similar to tennis in that you use a racquet (smaller than the one used in tennis) to hit a ball back and forth with your opponent. Like tennis, you can play in singles or doubles. However, there's no net between you and the other player; you stand next to each other in a small, walled-in court. The idea is to hit the ball against the front wall of the court until one of the players fails to return it. Each time you return the ball, you get a point-but there's a catch. The ball can bounce against any of the surrounding walls too, but it must bounce against the front wall for it to score a point. A full squash match is usually made up of five sets (11 points each) and a game can last from 40 minutes to an hour. (Talk about a serious cardio workout).

The squash ball is also a key component of the game-so much so that it can be the leading factor between a good match and a bad one. Unlike other sports, you play squash with different balls (indicated by a small, colored dot) depending on your skill level. All squash balls are small, hollow, and made of rubber. As they bounce off the court walls and floor, they heat up-making them bounce easier and faster. Each color behaves differently; usually, the blue ball is the fastest and is recommended for beginners, who may have difficulty warming it up. The red is for amateur players, while the yellow is usually played by the pros.

Why is squash so tough? It's like tennis, in that you're sprinting back and forth to hit the ball (have you seen Dato Nicol moves?!), but there's no wait time while tha ball comes sailing across the net. You're continuously moving around the court, switching directions at the drop of a hat, with the ball coming at you from virtually all angles-all without a second of rest. Never mind that you also need to hit and aim the ball to score points. Sounds exhausting, right? Now try doing it for an hour.

"You need speed, agility, endurance, plyometrics, and power". "That's why it's called the number-one healthiest sport-because all these different elements combined make it so tough and so difficult to play." (Feeling insired to try something new? Here are nine surprising reasons you need to try rock climbing right now).

Although squash is mainly all of day can play, training happens year-around. "The off-season will be predominantly a lot of endurance work," explains the 35-year-old pro. The typically training session for a squash player will cover speed, strength, agility, and stability. According to Dato Nicol, year-around workouts will definitely include weights and lots of running, but those workouts will then be modified to include more speed and agility work as the season approaches.

Another surprising perk of the sport: Unlike say, basketball, where height gives you a clear advantage, squash doesn't discriminate between body types. "There is no real ideal shape that you have to be," says Dato Nicol. Any person with any body type can play the sport, but it's up to them to use their body as a tool and manipulate it in a way that makes them a good player. "Everyone kind of brings their own element to the game with their shape and size. You adapt your game to your shape, to your size, and you win because of that." You can't be too tall or too short to play squash, which makes it very appealing to anyone. In a way, the player's body is their secret weapon to winning.

Sounds like there's no excuse not to hop in a court and give squash a try-if you can handle it, that is.