WHAT TYPES OF SPORT DRINK ? 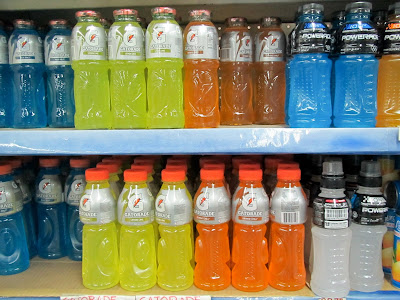 The term 'Isotonic' describes a solution that is of a similar 'thickness' or concentration (tonicity) as another solution. In this case it refers to a drink being of similar concentration to human blood (~285 - 295mOsm/kg).

This matters in the world of sports drinks because whether a drink is hypotonic (lower concentration that blood), isotonic (about the same concentration) or hypertonic (higher concentration) affects how much energy (carbohydrate) it can deliver and how quickly you can absorb it into your blood stream to replace the fluid you're losing in your sweat.

As with most things in life this all boils down to a couple of key trade offs.

BENEFITS OF ISOTONIC DRINKS
Vigorous exercise helps promote heart health, weight loss and overall fitness, but it can also make you sweat one to three quarts of fluid during intense works outs. Although sweating is your body's way to help keep its core temperature cool, it can lead to the loss of important minerals, dehydration and heat stroke. Isotonic drinks replace those nutrients and fluids quickly helping to prevent exercise-related injuries and illness.

Sports drinks are classified three ways: isotonic, hypotonic and hypertonic, depending upon the amount of carbohydrates they contain. Isotonic fluids have six to eight percent carbohydrates, including glucose -  your body's preferred energy source for exercise. Isotonic drinks have an osmolatily of 280 to 330 mOsm/kg, a measure of the number particles of carbohydrates, electrolytes, sweeteners and preservatices in a fluid. The osmolality rating of isotonic drinks best approximates that of your body's natural fluid balance, which is one reason why these drinks are so popular among runners and other endurance athletes.

The isotonic hydration allowed the athletes to continue high-intensity, stop-start activity up to 24 percent longer than those who drank a placebo solution.

The carbohydrates glycogen, which is converted to glucose and stored in your liver/muscles, requires less oxygen to be burned for fuel than protein or fat. In a typical male athlete, for example, the liver stores 90gm of glycogen and the muscles store 400gm. During hard exercise, carbohydrate stores can be depleted at a rate of three to four grams per minute, which can almost exhaust your body's supplies in exercise sustained at two hours or more. It would ordinarily take 24 - 48 hours for your body to naturally replenish those supplies, but an isotonic drink can return the glycogen balance to your body much more quickly.

It would seem logical to consume water during exercise when you're sweating, but water can cause bloating-and it doesn't contain carbohydrate or electrolytes. The higher the carbohydrate level in a drink, the slower the rate of stomach emptying. Isotonic drinks empty from the stomach at a rate similar to water, reducing urine output and encouraging fluid retention to prevent dehydration.

is the epitome of sports drinks and the most popular. Most people are biased when it come to Gatorade though, because of the advertising seen in world wide sports, and the Olympics. I would also like to point out that Vitamin Water, is pretty much a sports drink diluted with a bunch of water. Coca Cola also admitted that the drink "violates FDA food fortification and product naming guidelines".

Vitamin water keeps up your metabolism and makes you have more energy and run a lot faster.

This is the best! So many flavor and are very healthy and refreshing on top of that! My favorite is Kiwi Strawbetty. I drink this all the time.

Because it is way better then gatorade.
Powerade is yum and hydrates you.
Good on a cold day when your doing heaps of physical exercise or just out on the water. Powerade is good and not to bad for you.
Its greats boys.
Powerade gives you more energy then any other sports drinks.

Has more taste and variety of flavours than any other sports drink, such as lime, blackcurrant, mandarin and raspberry. It also has 5 essential vitamins, electrolytes and antioxidants to make you perform better! Choose Mizone, it is much more unique!
Enough flavour-no sugars and no crap- probably the best of the breed from a nutritional point of view.
Wont give you a sugar hit though (which is a blessing).

Simply awesome...Rehydrate the body faster then any other sport drink. With protein to help recover one better.

Best stuff ever they should bring it back.
Is it still around? Best test and refreshed just as well.

This is by far the best drink for hydration although I miss the coconut flavour, I still love either Lime or Orange Flavour.

Love that it's in the powder form so uses less plastic. And the tubs and recyclable too.
Staminade, perfect for a variety of purposes!

This a product that made very energized during my squash game. I play high school varisty squash team and it helped play the entire state game where I lead our team to a Championship.

so well known and the flavours are amazing. Drink this and be revived!

It is so tasty and it makes me feel refreshed. It comes in so many different flavors unlike gatorade and doesn't taste artificial.
So Refreshing!!!

Needs to go up.
Space Jam.
It is used in all sports drinks so it is better to drink this rather than spending money on other sports drinks.
Are you even kidding me?! Why is water number 16!!!Just because it isn't filled with water.