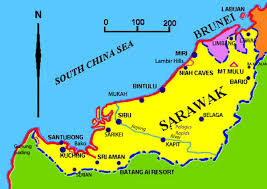 Gunung (or Mountain) Serapi is actually one of the peaks of the Matang Moutain, which is in the Kubah National Park. You can take the trail to the summit or you can take another trail which leads you through the rainforest to the Matang wildlife santuary. This mountain is a little different from the other ones which you can climb in the area. There is a Telecommunications tower built on top of the mountain. Quite frankly the tower building reminds me a little of some of the Starwars "architecture" anyway to build, and later resupply the telecommunication station on the summit the telephone company has built a concrete road nearly all the way to the top.This changes the experience significantly, on one hand you are walking on a road so you don't feel like you have quite as much contact with the nature around you. Also on a sunny day some sections of the climb may be a bit hot so take a hat. On the other hand however you are not constantly looking underfoot because the path is flat and even. And while there are not as many larger animals you will be able to spot a lot of smaller lizards and insects.This is also the mountain to choose for anyone who has concerns about their fitness, you can always go as fast or slow as you want, there are huts you can rest in and the road make it considerably easier to get to the top. In fact if you can climb the mountain on the week end you may see the locals climbing the  mountain for exercise, some read papers as they walk other jog to the top (not easy). Most of the journey to the top of the mountain you are surrounded by rainforest with a lot of ferns and other undergrowth.


Gunung Santubong is a mountain in the Malaysian state of Sarawak. It is located about 35 km north of the state capital Kuching. Mount Santubong lies within a gazetted national park of the same name. Entry to the park is now via the temporary Sarawak Forest Corporation park headquarter entrance. The issue of custodian of park entry has now been put to rest by the relevant authorities.

Mount Singai in Bau, Kuchng is better known for its pilgrimage purposes among Catholics. Lately however, many have ascended Mount Singai in seek of adventure and to experience its mountain trails, that lead up to a fantastic view of Bau, from the mountain peak. Mount Singai is located within the Bau District area, about 40 minutes drive from the City of Kuching. Roads leading to the mountain foot is good and sealed andyou can expect to pass by several Bidayuh villages while making your way to the foot of the mountain.

Gunung Gading (Mount Gading)National Park is located near the small town of Lundu in Southwest Sarawak, about 2 hours drive from Kuching. From the Brooke Dockyard (Gambier Street) bust station take the Sarawak Transport Company bus to the 3rd Mile bust terminal. From there take the express bus to Lundu - the journey takes approximately one and a half hours. From Lundu, take a van or taxi and ask to be dropped off at the park office. Alternatively, Kuching tour operators offer guided tours to the park.

Gunung Pueh (Mount Pueh), also known as Mount Pueh-Berumput, Mount Poi and Mount Poe, is a mountain located near Lundu, Sarawak on the Malaysia-Indonesia border. Mount Pueh was known to biologists for the collections made there by Eric Mjoberg (1882-1938), a Swedish Naturalist, who was Curator of the Sarawak Museum between 1922-1924. Mjoberg's herpetological collections from Gunung Pueh between October to December 1923, and other localities in Borneo, were reported by Smith (1925).

Trekking to the original Kampung Jogong at Mt Jogong after splitting off from Kiding, this village shifted 3 times. First to Taba then Sait and current place called Ayun. This trail offers the best scenery of Padawan. The second time we do this trail with a bit of variation which makes it even more interesting passing through farms and scenic views of the crescent shape Bungoh Range. Overnight trip is highly recommended to savour its beautiful sunset and wake up to see the milky clouds flowing across the mountains and valleys.

Mount Mulu (Gunung Mulu) is a sandstone and shale mountain. At 2376 m, it is the second highest mountain in the state of Sarawak, after Mount Murud. It is located within the boundaries of Gunung Mulu National Park, which is named after it. There is only trek leading to the summit of Mount Mulu. The summit is located at 24 km away from the park headquarters. The trek starts from the national park headquarters to reach Camp 3. It is a 12 km hike through the primary forests with an elevation of 1,200 metres. The mossy forest starts from Camp 3. It will be a few hours to climb to reach Camp 4. After Camp 4, there are a few vertical climbs which requires knotted ropes which eventually leads to the summit. Camp 1 is located along the descending trek from the summit of Mount Mulu. There is another 3-hour hike to reach the park headquarters from Camp 1.


Gunung Murud is a sandstone mountain located in Limbang Division, Sarawak, Malaysia. At 2,424 m (7,946 ft), it is the highest mountain in Sarawak, in the Kelabit Highlands. It is a white-yellowish sandstone mountain, formed during the Miocene Epoch, extends for 4 km long, running in the ENE-WSW direction. Mount Murud has two highest points, with one point higher than the other by only 15 m.

Batu Lawi is a twin-peaked mountain in the Kelabit Highlands or Sarawak, Malaysia (Borneo) that has played important roles in both ancient mythology and modern history. The taller 'male' peak is 2,046 metres above sea level, while the female summit is at 1,850 metres. It is one of the highest mountains in the state of Sarawak. Saddened by the loss of the plane, Tom Harrisson took part in the first successful ascent of the female peak, with Lejau Unad Doolinih and five other Kelabits in 1946. He then placed a commemorative board just below the summit in memory of the lost crew that was shot down on the way back to Morotai. It takes another 40 years before British and Australian soldiers from the 14th/20th King's Hussars, led by Jonny Beardsall, made the first successful ascent of the male peak in 1986. Among those who have attempted to climb Batu Lawi was Bruno Manser, a Swiss national who lived for several years among the nomadic Penan people in Sarawak. He attempted to climb the mountain in 1988 but failed. In May 2000, he entered Sarawak illegally and told his Penan companions that he planned to climb Batu Lawi for the second time but went missing since then. He was declared legalled dead on 10 March 2005. In 2007, the first Malaysian climbers from Multimedia University (MMU), Cyberjaya reached the summit of the male peak during 50th Independence Day.

Email ThisBlogThis!Share to TwitterShare to FacebookShare to Pinterest
Labels: Travel