Tips to hit the wall during marathon

Hit The Wall During Marathon !!! 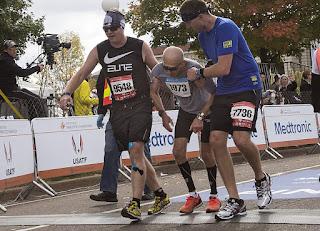 Every year hundreds of thousands of runners will have the opportunities to "Hit The Wall". "The Wall" is defined as that period in a marathon when things transition from being pretty hard to being really, really hard. It is the point where your body and mind are simultaneously tested!!!

How You Handle "The Wall" Can Literally Make Or Break Your Marathon!.
Here...
Read On To Learn More About Why "The Wall" Happens And How You Make Sure It Doesn't Derail Your Next Big Race !

How You Can Hitting The Wall Works !

"All In All, He's Just Another Brick In The Wall.
But If He Follows The Tips Offered Here, He'll Be Finishing The Race In Style Next Time" !

Stories of marathoners hitting the wall conjure up images of an ominous structure that appears out of nowhere, as if by some unforeseen and certainly not benevolent power. Countless numbers of runners can attest to the existence of the invisible obstacle and to its humbling potential,.

Hitting the wall, at its core, could just as aptly be called glycogen depletion onset. It's less graphic, but more scientifically accurate. Glycogen is a variety of glucose that the body stores to produce energy. Think of it as the fuel for your body's engine. Your muscles need it, and your brain thrives on it. Unfortunately, there is a limited supply of glycogen that your muscles and liver can stockpile-- about 2,000 calories to be exact.

The average runner burns approximately 100 calories per mile. It's no coincidence that many endurance athletes describe hitting the wall at the 20-mile mark of the marathon. That's the point at which 2,000 calories of glycogen fuel have been exhausted, resulting in an overwhelming feeling of heaviness in the legs, a lack of concentration and even feelings of outright despair.

But he wall is not an unavoidable obstacle. It is entirely possible, and in fact likely, that a properly trained marathoner who has strategized and races intelligently can cross the finish line without even glimpsing the mythical beast.

In this article I'll share how you can avoid hitting the wall and give you tips for getting past it if you do encounter it on your way to 26.2.

How To Avoid Hitting The Wall!!!

Glycogen is your body's most readily available form of fuel, but fortunately for long-distance runners, it's not their only fuel. Your body can also convert fat into energy, and even the slimmest of runners store enough body fat to cover approximately 600 miles -- the equivalent of nearly 29 marathons! The problem is, fat requires oxygen to burn, and if you're running at a good clip, you are said to be running anaerobically, which means "in the absence of oxygen".

Anaerobic running also increases the amount of waste products in your blood, leading to a burning sensation in the muscles.

So, what's an aspiring marathoner who wants to run her fastest possible race to do???

Former world - record - holding marthoner Juma Ikangaa once said, "The will to win means nothing without the will to prepare".

Show up at a race fueled by Hollywood hype and inadequate training, and you're asking for trouble!!!

You'll run anaerobically, exhaust your body's glycogen reserves and discover that your day has followed a humiliating script that no director would think of putting on the silver screen, save a comedy!

But with consistent running over a period of weeks and months, you'll become winded less - easily. Your anaerobic threshold -  the point at which your body draws its energy from non -  oxygenated sources like glucose - will be pushed back. You'll be able to run father and faster and burn a mixture of glycogen and fat.

Be advised, however, that even the fittest of athletes can make the mistake of letting their adrenaline dictate an unrealistic pace. Race day emotions, not to mention cheering crowds and competition, can cause a regional champion to think he can run with the international stars. If that pace is considerably faster than he encountered in training, he will likely come face to face with a large, brick structure that only he sees at mile 20 -- if not before.

Proper nutrition prior to and during the race is also key. An adequate, though not overindulgent, pre-race breakfast high in carbohydrates is ideal because carbs can be burned aerobically or anaerobically. Energy gels and rinks, which are also high in carbohydrates, can be taken approximately every 45 minutes during the marathon to top off your energy stores and stave off depletion longer. You'll want to experiment in training with what agrees with your stomach - some runners find that particular mixtures create nausea and even vomiting.

Suppose you've trained sufficiently, given yourself the proper nutrition, and yet you still hit the wall. How do you get past it???

This is where mental toughness, positive thinking and experience come into play.

There's a risk involved with getting better at marathoning. If your competition begins to pull away from you at a critical juncture in a race, you can't simply yell, "excuse me, but I don't want to over-exert myself and hit the wall!" Even if you're simply racing yourself and the clock -  perhaps you want to attain a Standard Chartered Marathon qualifying time -- you may have to run anaerobically for a longer - than - ideal period of time. It's a gamble that sometimes pays off and sometimes doesn't. "If you want to win a race you have to go a little berseks".

"The Marathon Can Humbel You".

Your brain's sole fuel is glycogen. Without it, your concentration fades. Glycogen depletion also causes your body to produce more of the neurotransmitter serotonin, which can make you feel tired. To make matters worse, the feel-good chemical dopamine-- responsible for excitement and motivation -- drops. It's a perfect storm of mental and emotional trouble. But you don't have to yield to it.

Rather than daydream or think about places you'd rather be at the moment (a dissociative strategy), sports psychologists recommend staying in the present and using an associative strategy. Focus on the race, what's happening in your body and ways you might adapt. Ask yourself, "Have I had an energy drink or nutrition lately?" and "Can I Vary My Pace Slightly?" You may discover that your decreased mental awareness has caused you to overlook an important physical key to overcoming the very problem you pace.

Your internal dialogues is extremely valuable~!!!

Repeat positive, self-affirming statements to yourself.

"I am not weak and I do not quit"" your subconscious will only preserve the heart of the message which is "I Am Weak And I Quit".

It's better To Say "I Am Strong And I Always Finish".

Such mental "Tricks" are not truly magic, of course. Positive internal dialogue needs to be practiced during training until it becomes habit!

Such habits can have a huge influence on the body.

The best racers succeed by acting and believing in the opposite of what their body is telling them. They "fake it 'til they make it,"

Experience can also lessen the shock of hitting the wall. If you've been through it in training or previous races, you're less likely to succumb to it. As humbling and physically challenging as it can be, it is only temporary. That instrinsic knowledge alone can be enough to get you to the finish line and emerge from the shadow of the wall !!!


Articles You Must Read