5 THE BEST RHYTHM OF ASEAN

THE RICH TRADITIONS OF SOUTHEAST ASIAN MUSICAL INSTRUMENTS HAVE BEEN DELIGHTING THE REGION FOR CENTURIES WITH THEIR UNIQUE SOUNDS !

1- GAMELAN
Gamelan is the traditional ensemble music of Java and Bali in Indonesia, made up predominantly of percussive instruments. The most common instruments used are metallophones played by mallets and a set of hand-played drums called 'kendhang' which register the beat. Other instruments include xylophones, bamboo flutes, a bowed instrument called a 'rebab', and even vocalists called 'sindhen'.

Although the popularity of gamelan has declined since the introduction of pop music, gamelan is still commonly played on formal occasions and in many traditional Indonesian ceremonies. For most Indonesians, gamelan is an integral part of Indonesian Culture.

A gamelan is a multi-timbre ensemble consisting of metallophones, flutes, gongs, voices, xylophones, as well as bowed and plucked strings. The hand-played drum called 'kendhang' controls the tempo and rhythm of pieces as well as transitions from one section to another, while one instrument gives melodic cues to indicate treatment or sections of a piece. Some of the instruments that make up a gamelan in present-day Central java.

2- KHAEN - Mind-blowing melodies
Wind instruments are found across Southeast Asia. A famous example is khaen/khene, which comprises bamboo pipes of varying lengths mounted on a windchest. A cultural icon in Laos and Northeast Thailand (Isan), 'khaen' is a common feature in village festivals. 'Khaen' music was added to the UNESCO Representative List of the Intangible Cultural Herritage of Humanity in 2017.

The most interesting characteristic of kehen is its free reed, which is made of brass or silver. It is related to Western free-reed instruments such as the accordion, harmonica, harmonium, concertina and bandoneon, which were developed beginning in the 18th century from the Chinese Sheng, a related instrument, a specimen of which had been carried to St. Petersburg, Russia.

It has seven tones per octave, with intervals similar to that of the Western diatonic natural A-minor scale: A, B, C, D, E, F, and G. A khaen can be made in a particular key but cannot be tuned after the reed is set and the pipes are cut. If the khaen is played along with other instruments the others have to tune to the khaen.

A popular variant uses wind-chests made from dried calabash gourds. Known by different names across the region: dinh nam by the Rade community (Vietnam); naw by the Lahu, lachi by the Akha, fulu by the Lisu (Thailand); sompoton by the Kadazan-Dusun and Murut (Sabah, Malaysia); keluri, keledi or enkulurai by the Kayan and Kenyah (Borneo); and kadedek by the Kebahan (West Kalimantan, Indonesia).


3- KULINTANG/KOLINTANG
Kulintang - is a modern term for an ancient instrumental form of music composed on a row of small, horizontally laid gongs that function melodically, suspended gongs, accompanied by larger and drums. As part of the larger gong-chime culture of Southeast Asia, kulintang music ensembles have been playing for many centuries in regions of the Eastern Indonesia, the Brunei, Timor, Southern Philippines, and Eastern Malaysia, Kulintang evolved from a simple native signaling tradition, and developed into its present form with the incorporation of knobbed gongs from Sunda. Its importance stems from its association with the indigenous cultures that inhabited these islands prior to the influences of Buddhism, Islam, Hinduism, Christianity or the West, making Kulintang the most developed tradition of Southeast Asian archaic gong-chime ensembles.

The instrument called the "Kulintang" -consist of a row/set of 5 to 9 graduated pot gongs, horizontally laid upon a frame arranged in order of pitch with the lowest gong found on the player's left. The gongs are laid in the instrument face side up atop two cords/strings running parallel to the entire length of the frame, with bamboo/wooden sticks/bars resting perpendicular across the frame, creating an entire kulintang set called a "pasangan".

The gongs weigh roughly from two pounds to three pounds each, and have dimensions of 6 to 10 inches for their diameters and 3 to 5 inches for their height. Tradionally they were made from bronze but due to the disruption and loss of trade routes between the islands of Borneo and Mindanao during World War II, resulting in loss of access to necessary metal ores, and the subsequent post-war use of scrap metal, brass gongs with shorter decaying tones are now commonplace.

The main purpose for Kulintang music in the community is to function as social entertainment at a nonprofessional, folk level. This music is unique in that it is considered a public music in the sense everyone is allowed to participate. Not only do the players play, but audience members are also expected to participate. These performances are important in that they bring people in the community and adjacent regions together, helping unify communities that otherwise may not have interacted with one another. Traditionally, when performers play kulintang music, their participation is voluntary. Musicians see performances as an opportunity to receive recognition, prestige and respect from the community and nothing more.

4- SAPE - With Strings Attached
Sapeh, sampet or sapeq is a type of lute played by the natives of Borneo, an island shared between Malaysia, Indonesia and Brunei. In Malaysia, it is synonymous with the Orang Ulu community of Sarawak, while, in Indonesia, it is played by the Kenyah and Kayan Dayaks. In the past, Sapeh was used exclusively in ritualistic music, but now blends well with contemporary arrangements.

Initially, the sape was a fairly limited instrument with two strings and only three frets. Its use was restricted to a from of ritualistic music to induce trance. In the last century, the sape gradually became a social instrument to accompany dances or as a form of entertainment. Today, three, four or five-string instruments are used, with a range of more than three octaves.

Technically, the sape is a relatively simple instrument, with one string carrying the melody and the accompanying strings as rhythmic drones. In practice, the music is quite complex, with many ornamentations and thematic variations. There are two common modes, one for the men's longhouse dance and the other for the woman's longhouse dance. There also is a third rarely used mode. Sape music is usually inspired by dreams and there are over 35 traditional pieces with many variations. The overall repertoire is slowly increasing.

Sape are still being made in Borneo, and modern innovations like electric sapes are common.


5- PINPEAT/PIPHAT
A 'pitpat' is a kind of ensemble in the classical music of Thailand, which features wind and percussion instruments. It is considered the primary form of ensemble for the interpretation of the most sacred and "high-class" compositions of the Thai classical repertoire, including the Buddhist invocation entitle sathukan; as well as the suites called 'phleng rueang'. It is also used to accompany traditional Thai theatrical and dance forms including 'khon'- masked dance-drama, lakhon- classical dance and shadow puppet theather.

OTHER ARTICLE YOU CAN READ HERE. JUST CLICK LINK BELOW 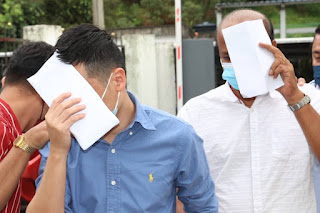