11 REASONS STRAIGHT PEOPLE HAVE SEX WITH SAME-SEX OTHER 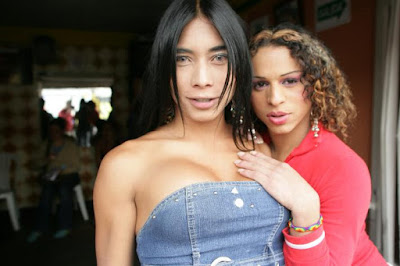 Assigning someone's sex is based on biology (chromosomes, anatomy or hormones). But a person's gender identity (the inner sense of being male, female or both (doesn't always match their biology). Transgender people say they were assigned a sex that isn't true to who they are.

Many people have assumptions about what it means to be transgender, but it isn't about surgery, or sexual orientation, or even how someone dresses. It's how they feel inside.

People Transition To Be True To Themselves

When people make changes to match the way they feel inside, it's called transitioning.

Some change their clothing, hair, and also name. Some ask others to change the pronouns they use to identity them. (They may choose "he", "she", "they", or even "ze".) SOme use hormones or surgery to alter how they look like and feels.

How Is Sexual Orientation Different From Gender Identity ?

I Would like to use the acronym LGBTQ to describe the lesbian, gay, bisexual, transgender, queer community. The Q can also sometimes mean questioning.

Sexual orientation describes a person's enduring physical, romantic, and/;or emotional attraction to another person (for example: gay, straight, lesbian and bisexual), while gender identity describes a person's internal, personal sense of being a man or a woman, or someone outside of the gender binary.

Now We Talk About...
Why Straight People Have Sex With Same-Sex ?

Many types of men engage in same-sex relationships, for a variety of reasons, which I will identify for you. Here are a few of them what I'm do research:

Sometimes heterosexual males experiment with other males sexually, usually in adolescence and or young adulthood (up to  age 25), for the experience or to satisfy curiosity.

These straight men have high sex drives and are sexually aroused easily. They connect with men for physical sexual release, which can be quick and easy and allows them avoid having to emotionally engage.

These are heterosexual men who are strongly interested in various sexual experiences that many people might label " homosexual." To avoid being identified in this way be women, they seek out men, whom they perceive as nonjudgmental.


This is also known as "homosexual imprinting." These heterosexual men are not homosexually oriented. They do not sexually desire, nor are they aroused by, other men. However, they compulsively reenact childhood sexual abuse by male perpetrators through their sexual behaviors with other men. If a basically heterosexual boy is molested by a male relative, he may keep "returning to the scene of the crime" to defuse his  emotional pain or desensitize himself to it. When his original trauma gets cleared up, the "homosexual" behavior he's reenacting ceases. This isn't about gayness; it is about sexual abuse.

These are men who are romantically attracted to women and are usually partnered  with women. They can be sexual with women they love, but they are predominately aroused and driven sexually by desire for sex with other men.

These are heterosexual men who crave affection and attention from their fathers and seek sex with men as a way of getting that male nurturance and acceptance.

"Gay" behavior can be the result of sexual addiction. But even a "cured" sex addict may still feel attracted to men, as do celibate gay priests.

These straight men enjoy being looked at by both men and women as long as they are being admired for their bodies. many are body builders and muscular and enjoy the homoerotic attention of gay men and might even flirt with  gay men to encourage more admiration.

Articles In Blog Your Must Read !!!